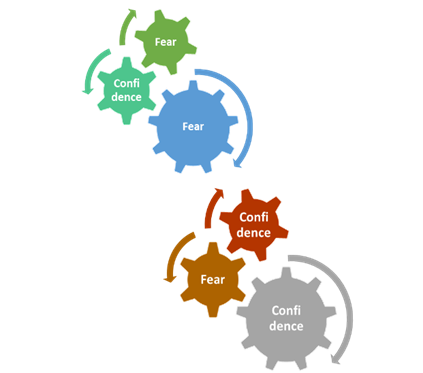 During mid-life career change (or reinvention), a fascinating interplay emerges between fear and confidence – one that is both dynamic and frequently changing.

Fascinating because the relationship appears not to be direct or inverse as they can grow and decline at different paces and both can be a driver (affect) and a response (effect). So, it is not necessarily the case that a decrease in fear is associated with an increase in confidence or vice versa. It is typically more individual and complex.

Some people find it useful to think about this interplay as a ‘dance’ between two partners – but where the leader of the dance can switch, the type of dance can change, and they can also dance individually while the other watches in the background.

In relation to pace, both fear and confidence can have a real impact – accelerating, slowing, reversing, changing direction, or stopping reinvention – hence the ‘gear’ metaphor. We are all familiar with flight, fight and freeze responses to fear – this idea is very similar to that.

The different coloured gears symbolise the variety that can be experienced at different times. Initial fears might include fear of being irrelevant, becoming my parents, being useless, or being stuck forever. Later fears might be fear of making the wrong decision, being in limbo, not being good enough, being vulnerable, uncertainty, changing, not changing, or not being able to pay my bills. Self-confidence was also reported to be dynamic in nature – varying by individual and over time.

Some writers assert that fear is not necessarily a negative force and “can be challenging, exhilarating forcing us to do something” (Keegan, 2015 p76). It has also been argued that self-esteem can be both a positive force propelling change and growth in the client, but it may also inhibit and limit (Maxwell & Bachkirova, 2010).

In relation to coaching practice, the main implications relate to the positioning of the coach in relation to this ‘dance’. In my own research, experienced coaches noted that there is a need to clearly and respectfully reflect aspects of the dance (including possible patterns) back to the client – by the coach sharing what they notice and experience in ways that provide fresh insight. Additionally, they advised considering how the fear (or confidence) could be serving the client at any given point as opposed to deliberately or automatically trying to address it. To be able to ‘reflect or illuminate the dance’ in this way, and avoid introducing bias, several coach participants stressed the need to ‘own your own stuff’ through professional development and good supervision. I would 100% support this advice and gladly pass it on here.